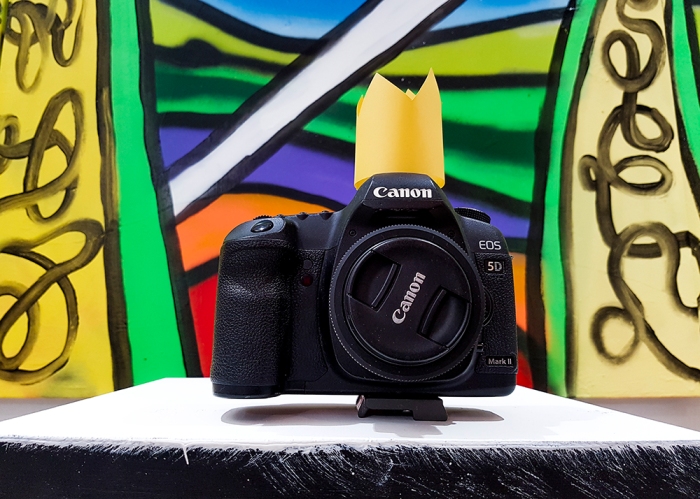 As a painter, I find it crazy that I am so dependent on the camera.  I use the camera to document my work, to create quality images to submit to gallery shows, to display my work on the website, to create short digital films explaining my art practice and so on.

So, when my camera died a few weeks ago, I knew I had to get a replacement fast.

Cost was a significant issue, particularly because I had been planning to upgrade my camera for some time.  After about 10 years, I was really feeling the limitations of a crop sensor. Crop sensors distorts the field of view that the len produces.  Crop sensors are also less sensitive in low light conditions. There is a lot more technical stuff that camera nerds can say about this, but for me these were the two critical issues. So, I knew that my next camera had to be a full frame (i.e., full sensor) camera, but these cameras are very expensive.  It is not unreasonable to spend between $2,000 and $5,000 for decent model.

After scanning several YouTube videos on different Canon models, I quickly settled on two cameras: an used 5D Mark II for $800 or a new 6D for $1300.

When I arrived at Henry’s, I discovered that the used the used camera came with two batteries and a re-charger, thus adding hundred of dollars value to the camera. So, the decision became easy and I purchased the 5D Mark II.

I had talked to the store several times and they said that used cameras were all in good repair.  Their used camera come with ratings systems and I got a 7 which is on the low end. According to the store, these means the camera has marks on it, but is still good to operate.  However, the guy in the store looked gravely at me and said that the camera shutter count (158,000) was beyond the lifespan for this camera (150,000).

Now, I never really trust people that make a case for extended warranties, but I had just saved several hundred dollars with the inclusion of the batteries and recharger.  On the other hand, I was buying a 10 year old camera. So, I opted to spend the $150 for the 3 year warranty. This was still cheaper than buying a new Canon 6D camera.

Once I got home, I immediately started researching shutter life spans and discovered that the guy was right, shutters are the things that will most likely fail on a camera and that 150,000 shutter count is the promised life span for a 5D mark II.  However, many cameras will last until 200,000 with a few reaching 300,000. So, I am a light user and 40,000 photos will take some time to reach. In the meantime, I am covered for any shutter repairs for the next 3 years.

Hopefully, I will get another 10 years out of this camera.

Inspired by architecture and landscapes, my art explores our relationship to place, memory and identity. As a mid career artist, my art practice includes: painting, murals, short films, and sound art. View all posts by Chris Erskine

Creating Art Based on Your Stories and Photos

A Chronicle of the people of the Methodist Church in Canada

This is the official web site of the Save Century Manor Task Force 2 (CMTF2). This task force was created not only to draw attention to the existence of Century Manor, an important Hamilton heritage building in danger of demolition by neglect, but also to provide information on Century Manor and to gain support within and outside our community for our ongoing fight to save and preserve this heritage building through restoration and adaptive reuse.

a blog by Oliver Peters

about audio recordings of nature